To be honest, I don’t really know what to write about the last week, because I was done riding my bike and the adventurous part of my trip was over when I packed my bike in its box in San Francisco. Then I was a regular tourist and I would usually not keep a blog for a normal vacation, but since I said I was going to write one more blog-entry, I at least want to share a few pictures and summarize my trip a little bit.

In San Francisco, I was staying with Nisha and Brandon in their nice apartment right in Haight-Ashbury, the former Hippie-Center. After just relaxing for one day and packing my bike, I had one day of sightseeing. It involved a lot of walking and by the end of the day, I had walked for about 15km. I went all the way to the harbor, checked out the ‘steepest street of the US’, had lunch in Chinatown and hung out at a park for a while. It’s a nice city and I was again really lucky with the weather, but I have to say that there are just too many sketchy people, drug-addicts and homeless in my opinion. It’s a huge problem that I have noticed throughout California and in San Francisco it still seems to be hip in somce neighborhoods and I just find it disturbing. But nevertheless, my day of sightseeing was great and I was really tired in the evening and looking forward to my roadtrip to Vegas. 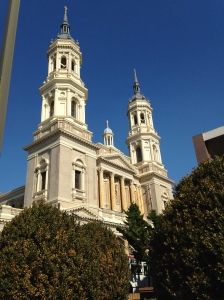 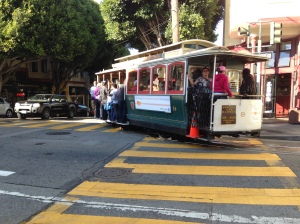 The famous cable-cars of SF 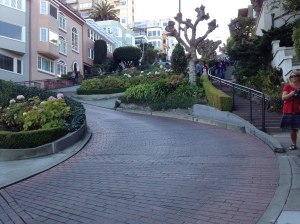 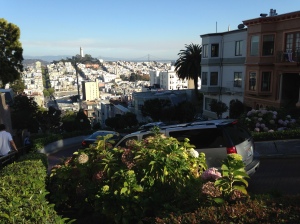 Lombard Street – the steepest street in the US (?) 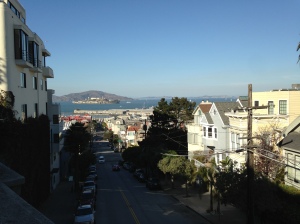 Alcatraz in the background 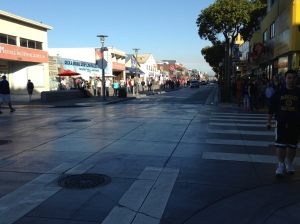 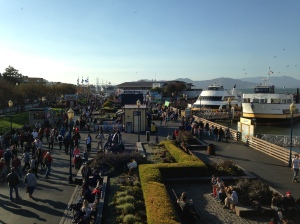 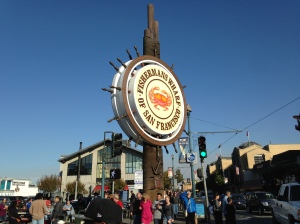 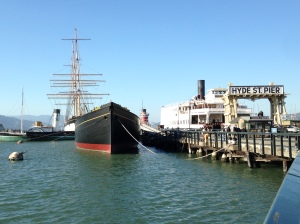 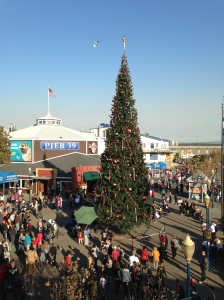 Weird to see Christmas trees. Doesn’t feel like it! 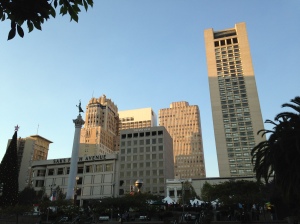 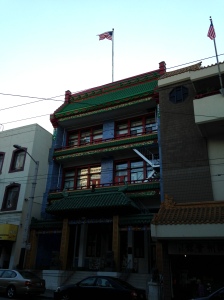 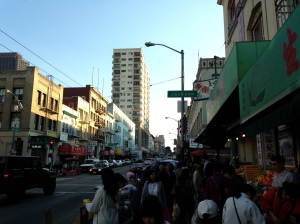 The next morning, I picked up the rental car and felt really American when they upgraded me to a big SUV since they didn’t have a smaller one available. It was weird to be driving again, but I guess you never forget how to and since it was a Sunday morning, we (Addison joined me for the trip) at least avoided the rush hour. After a few stops on the way, we reached Yosemite National Park. We both were pretty tired and lazy and didn’t really have that much time to go for a big hike to check it out since the sun was about to go down. So we just drove through the park and over the pass and enjoyed views and the sunset from the car. We spend the night in Mamooth Lakes in the mountains of California. 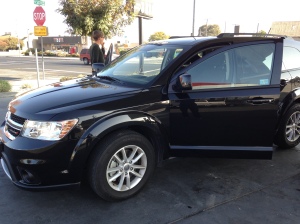 More comfortable than a bike, but less adventurous – my rental car. 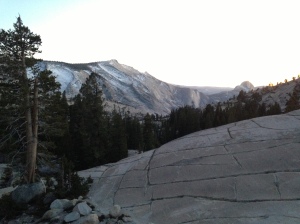 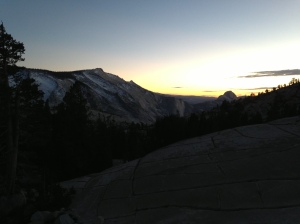 In the morning it was freezing cold and we left at 7.30 – I was definitely glad not to be on a bike at that time, but in a warm car. We drove a couple of hours before we reached the Death Valley National Park – the last one for me! I have been to this National Park several times, but I am amazed by the landscape every time again. The desert, the mountains surrounding it and just such a hostile environment with miles and miles of nothing – fascinating. It also would have been a huge challenge to ride the bike through it, but unfortunately that wasn’t an option (at least not this time). 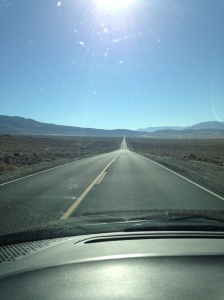 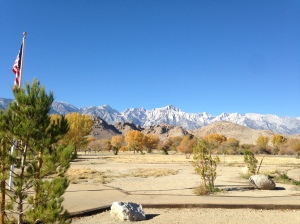 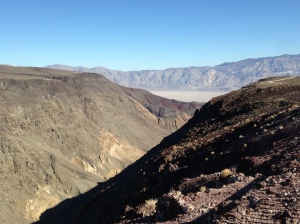 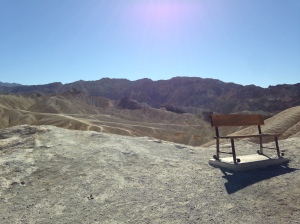 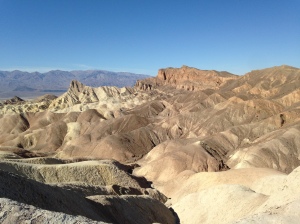 In the afternoon, we finally reached Las Vegas and after getting some groceries for the next days, we went to the hotel and were right in time for the managers reception – free snacks and drinks. The days in Vegas were really relaxing, but also pretty uneventful. We walked on the strip for a long time, through hotels, gambled a little bit and enjoyed the sun at the pool. One night, we wanted to go Downtown to see the lightshow at the famous Fremont Street and after a long 20 minute busride, we discovered that the road was closed for construction – that was kind of disappointing since this was the only attraction away from the strip we wanted to see, but we saw lots of lights anyways. 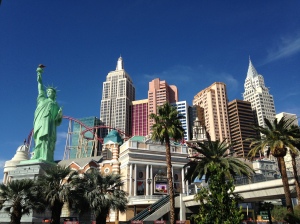 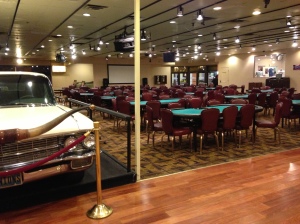 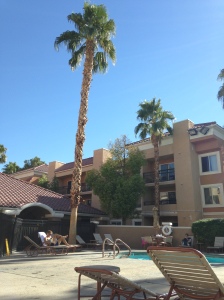 Relaxing in nice temperatures before the cold of Germany 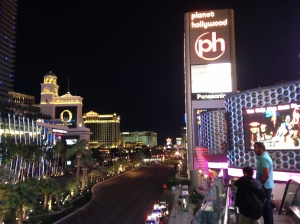 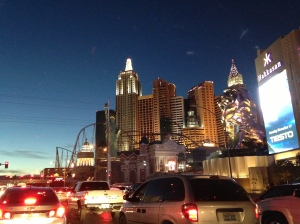 After Addison had left on Wednesday night, I packed all my stuff and got a cab to the airport the next day. The cabdriver asked me what I had in the big box and when I told her about my trip she was really impressed and luckily we had a 10 minute-car ride to have a short Q&A-session. 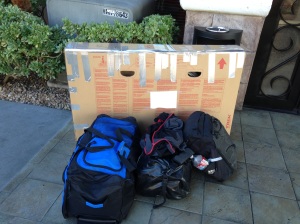 Time to go back

That was it – as mentioned before, I don’t have the funny, crazy stories this time and I feel like this might be the best evidence to show that a bike-trip is something special. At the very beginning of this trip, I said that this blog might help people understand why anyone would bike across the US or any country. And I think and hope I was able to answer this question through my stories and pictures to some degree.

On a bike, you move slowly enough to stop wherever you want to to take pictures, a break or just talk to people. You are also ‘forced’ to speak to locals, because they want to know what you are doing or you need directions or help. And as soon as you talk to people, you remember towns, places and roads and looking back at maps or pictures, I will probably remember almost all of the encounters I have had in these 86 days.

It is still to early for me to realize that I have done what I had been dreaming of for half my life, but I’m sure it will hit me once I’m back in real life and I’m looking forward to going through all the pictures and videos.

A lot of people have asked me if there weren’t any moments where I just wanted to quit and go home. And of course there were! Some weeks, I had that feeling at least once every day and just hated myself for doing it. But I knew before I started in NYC that this would happen and even after the toughest ride: at the end of the day when I reached a destination and was a little bit closer to my goal, I knew why I was doing it. I think the bad times are part of the trip and make you enjoy and appreciate the good times even more.

I think on a bike trip, there are always three phases: at the beginning everything is new and exciting and you can’t wait to start. The middle-part is challenging, because you realize for the first time what is still ahead of you and sometimes it feels like you are not moving. And then the final when you get closer and closer to your destination. I believe that these parts adjust their lenghts to the total time of the trip. Meaning that if you go on a trip for – lets say – 6 weeks, you’ll have 2 weeks of each phase while on a trip of 6 months, you’ll have 2 months of each. My feeling in the middle part was that I liked what I was doing, but this would probably be my last big tour. But the closer I got to the end, I realized that I would actually miss it and especially miss having a big goal for the next 10-15 years that I could work for/dream about (besides family, job etc.). The last 2-3 weeks of riding and even while taking the picture infront of the Golden Gate Bridge, I caught myself thinking about one thing: “what could be next!?”. I did come up with some ideas that I really want to do at some point in my life – I know it won’t happen anytime soon, but it’s always good to have something to look forward to even if it might never happen.

Finally, I want to answer the question everyone always asks:

Worst/scariest part of the trip:
1. The thunderstorms in Kansas. I had written about it on here. Being on a bike with noone and nothing around you in the plains of the Midwest for 100km can be scary. But add huge thunderstorms to that and it reaches a new level. I was lucky to never got caught in one, but just the feeling of being surrounded was scary and stressful.

2. Kneeproblems. I never really wrote about it, but after about a week I thought I might have to end the trip. I have pretty messed up knees from soccer and after a couple of days, they started hurting while cycling. First only right, but then both and it got to the point where I couldn’t sit or even lay in bed without enormous pain – let alone climbing a hill. I tried everything, took painkillers and in the end, a simple adjustment of my seating position did the trick and I never had any problems again.

Best part:
The people were amazing and I didn’t have ONE scary moment. The drivers were better than expected and respectful and it was just all in all great. I’m not lying when I say that everything was great: people, weather, landscape, scenery…just look at all the pictures over the last months and that will give you a general idea.

I want to thank everyone for following my adventure, sharing the blog/posts with others, commenting, messaging, liking or just reading it. The feedback I received from all of you was motivating to keep doing it and now I have a great memory to look back at.

And a big thank you for all the donations to Make-a-Wish Germany! With your help, I was able to help fulfill the dreams of others while fulfilling my own. 2600€ are a great amount and I’m really happy!!! 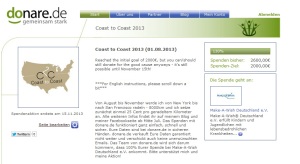 One last fact: 0 (ZERO) flat tires on the whole trip!

“Essay” for school written in 2003 I took on tour with me to keep me motivated in bad times (never had to look at it thankfully). Back then I thought I was pretty much done with planning and had it all figured out. But most of it is actually pretty good considering my age.
“…I will start training for the tour this summer, since I have set this to be my lifegoal” – gotta find a new one.

1 thought on “Travel east, travel west…after all home is best (?)”