The last week was a big one! After almost 7000km, I got to San Diego where I reached the Pacific Ocean. But let me summarize the events of the past days.

After leaving Brawley, I had one more mountain range between me and the Pacific. It went up to 1400m (4000 feet) and it was challenging, since I was actually below sea-level in the valley I was in. The climb started just behind the little town of Ocotillo and I decided to camp there for the night in order to have all day for the mountain. The roads to Ocotillo were all terrible – sandy roads, broken roads with cracks and just no fun at all/not safe to ride on. So I decided to be illegal and take the interstate (comparable to the Autobahn) for about 25km, because it had not a lot of traffic and wide shoulders. All the locals had told me I should just take it and I was glad when I arrived in Ocotillo without any police-officers stopping me – but apparently they tolerate cyclists on that stretch since they know about the other road conditions. 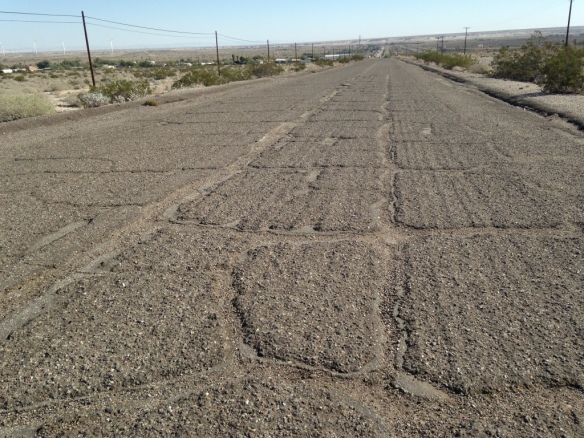 Spent some time below sea-level in the valley

The climb out of Ocotillo was again one of the tougher ones with steep and long grades, but since I knew in advance what was coming up, it wasn’t too bad and I got to my campspot fairly early. At the campground, the cleaning lady, Donna, asked me about my route and was thinking that there was a better way to get to San Diego. Since she couldn’t think of it straight away, she decided to take me on a 30km test-ride in her car so I could decide which road I wanted to take the next day – and after all I stuck with the original plan which is always the best (according to my mom). 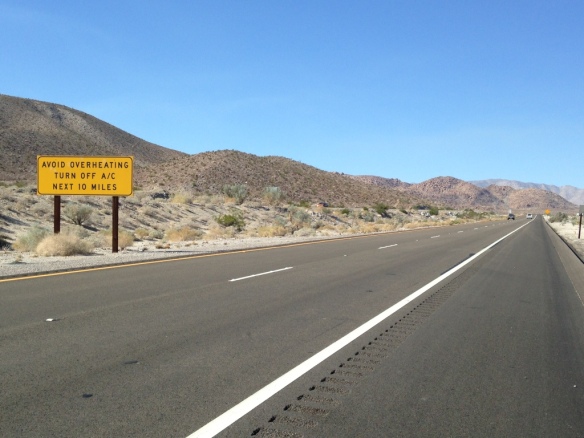 I would love to have the struggles of car-drivers sometimes

The climb from Ocotillo just went one way – UP!

Although the next day was supposed to be a fairly easy descent into the outskirts of San Diego and it looked all downhill on my elevation profile, it was an exhausting day. I’m not sure if I have mentioned this phenomenon on here before, but it’s all about the expectations. If you know a tough day is coming up and you prepare for the “worst”, it usually isn’t that bad since your mind is set to take on whatever is coming up. If you, on the other hand, are too relaxed and think the next day will be a piece of cake, every hill, every rough road and any kind of wind will be demoralizing and hard to deal with. It wasn’t a bad day, but just not as easy as I had expected and therefore I was glad when I finally got to my hosts house in San Diego, about 25km from the beach. At Jeff’s and Ruth’s house, I got some needed rest and also met Patrice, a cyclist from Quebec. I had heard stories about him over the past 3 weeks from several people I had stayed with and never thought I would catch up with him. But there he was and it was funny to chat with him about our experiences in the morning.

Descent towards the Pacific

The big day had arrived and the weather was not appropriate for it! It was cloudy, foggy and only about 20 degrees Celsius with a pretty cold wind. The weather is typical for the region and it usually clears up during the day, but sometimes it doesn’t. The fog and clouds mostly stay at the beach while the weather inland is pretty decent. After waiting at Jeff’s house until about lunchtime for the weather to get better, I decided to just take off. I made my way through the busy streets of San Diego and ended up on a bike-path which led me for 5km to the beach and the Pacific Ocean. It’s hard to describe what it felt like when I did see the Pacific for the first time. I was really happy, proud and couldn’t believe I had actually biked across the American continent. At the same time, I didn’t really know how to ‘celebrate’ the moment, since the weather wasn’t too inviting to go swimming. It actually looked like the north sea back in Europe with the grey skies, but I still went for a quick swim and traditionally dipped my front-tire in the Ocean – I took a better picture the next day though, when the sky was blue! 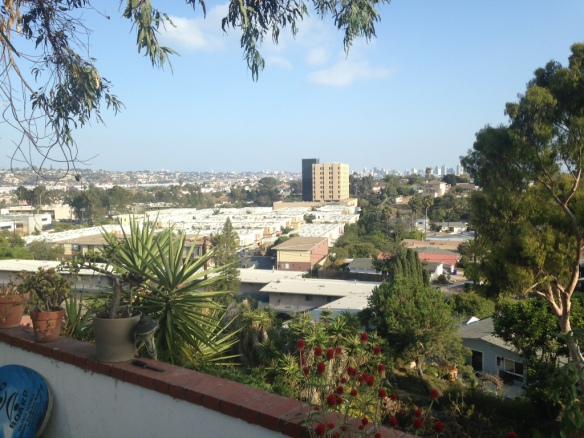 The following days, I cycled up the coast and it was mostly a pleasent ride with nice views although the weather stayed strange for the most part with clouds at the beach and blue skies inland. On my first days up the coast, I also encountered my enemies for the last stretch of this trip – the wind and hills. Most cyclists choose to go down the coast since the prevailing winds are coming from the Northwest – most people I talked to on the way were therefore surprised that I was heading towards San Francisco and one of them said what probably all of them were thinking: “What the hell?! You are supposed to be coming down from San Francisco!”. But since I chose my route for a reason, I’m going to do it all the way! 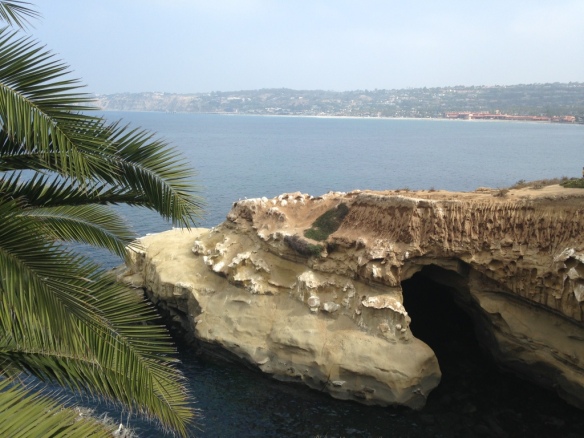 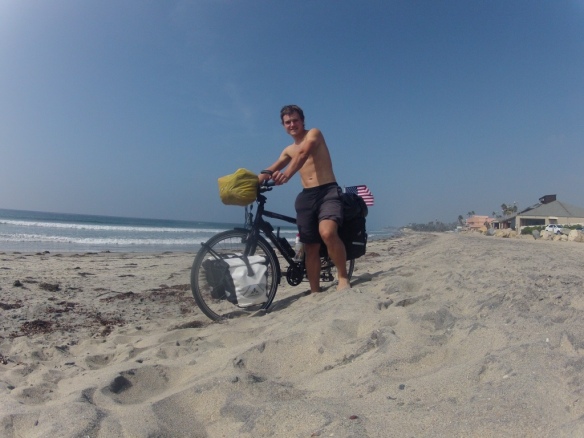 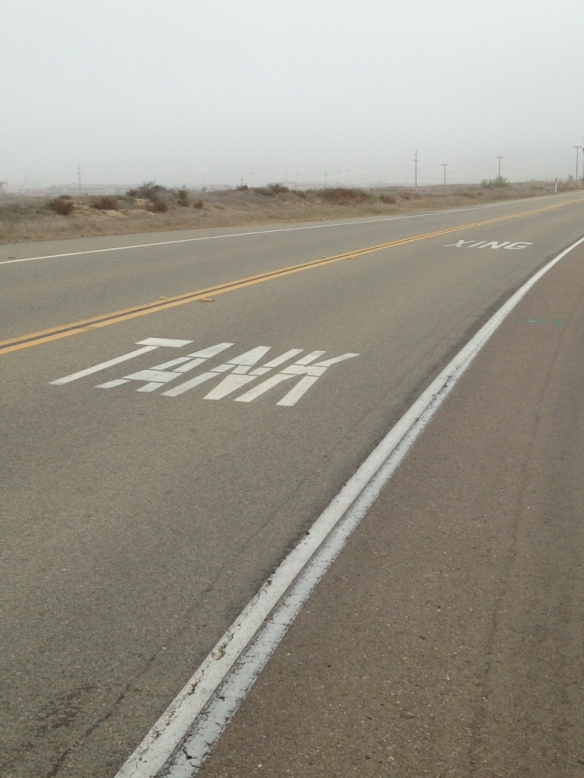 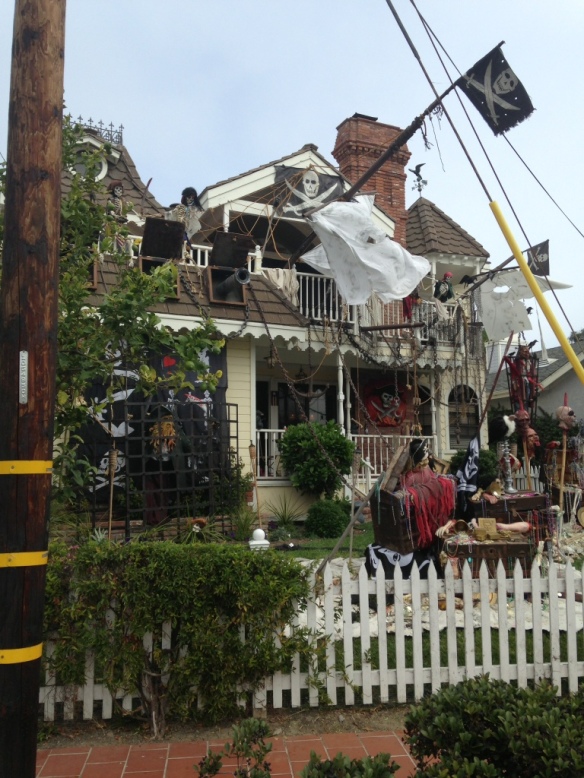 Halloween is coming up!

After going through famous beachtowns such as Laguna Beach and Newport Beach which weren’t always biker-friendly and had a lot of traffic, the next big challenge was to get into Los Angeles. I was staying with a friend from Barcelona, Emiri, who lives downtown which was another 25km from the beach and my route. There are more exciting tasks than going through the second biggest city in the US without a lot of bikelanes and awful traffic. I talked to several people on my way and they all told me to stay at the beach as long as possible and take a big avenue downtown in order to avoid the dangerous and sketchy neighborhoods where the gangs rule the streets. I tried my best to follow the advice and after all it wasn’t too bad – again it’s all about the expectations!

Trying to find the best way into LA 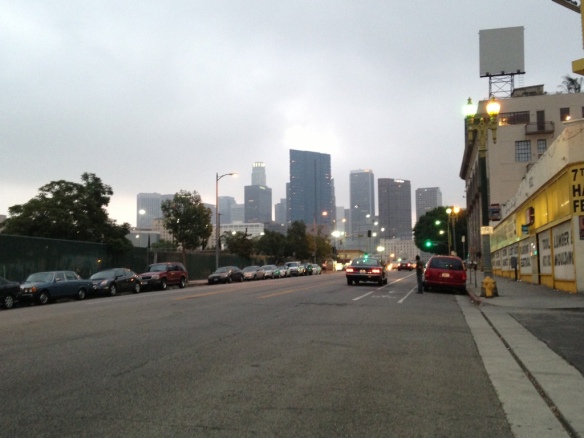 After a long day: downtown LA!

It was really nice to see a friend again after such a long time on the road and always meeting new people. I stayed with Emiri for two nights and somewhat explored LA. We went to Hollywood, the Griffith Observatory, the University of Southern California where she goes to school and to a German restaurant – I think that’s all you can do in one day in LA ;).

Bratwurst and German beer far away from home in the “Wurstküche” 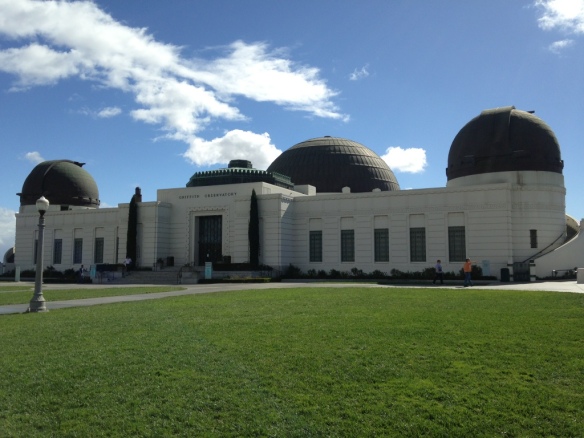 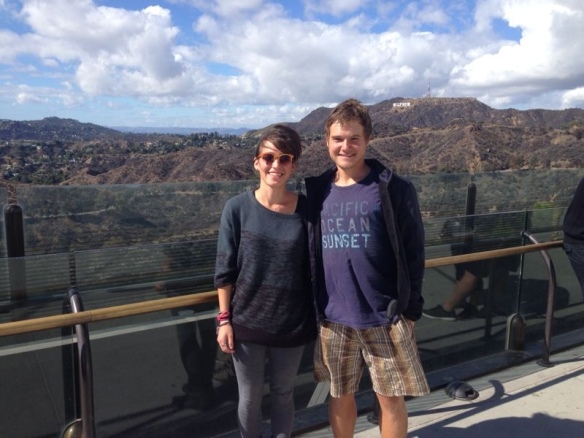 Impressions from the great time in LA with Emiri – what a huge city!

The way out of LA was not too bad, but with all the traffic I constantly had to focus and be alarmed in case a car got too close. After all, I made it and rode along the beach through Santa Monica and Malibu before getting to the place I’m staying at tonight in Oxnard. My host here, Chris, took me to a dinner with his friends which was really interesting since they have a rather unusual hobby: knitting. Turns out that I’m a natural and besides learning how to milk a goat, I now also know how to knit! Had a fun night and realize more and more how I will miss random evenings like this when I get back!

It’s getting hillier again, but riding along the Ocean is amazing

New hobby/skill: learning how to knit

I do want to talk about one encounter I had on the streets this week though, because I have thought about it a lot. When I was riding on the beach-path through Huntington Beach, I noticed another touring cyclists who was sitting on a bench close to me. I went over to him to talk about his ride and Ed told me about his problem: He broke his back a couple of years ago in a work accident and ever since has not been able to work and had to retire and lives off of the government’s social security system. He didn’t want to sit at home and do nothing and started cycling. Right now he is doing a big loop from his hometown Denver down the Pacific Coast and then back to Denver. Due to the government shutdown, he didn’t get his money this month and all he had left were 17 cents. He will get the money for last and the upcoming month on November 3rd which meant he still had 5 days to go on 17 cents. He had found a place to camp for free at the riverbed and was desperate because he didn’t know how to get food. I felt really bad and offered him a cookie and some fruit. He was so happy about it and before I left I gave him some money so he could at least get lunch that day. Why do I mention this? A lot of people ask me if this trip has changed me or if I have learned something. And although this situation was nothing major and I don’t want my trip to be philosophical, it did make me realize that I have a different view on certain things after 3 months on the road. While the initial questions in my head were: “Why can’t he work, but cycle?” or “Why didn’t he save more money before going on a trip?”, I after all decided to help him out a little bit, because so many people have helped me on this trip and given me money, food or a place to sleep. I just think I should be a little less sceptical and believe in the good in man – but of course this shouldn’t make me naive. Anyways, this was just a sidenote for the people who have asked me this question. 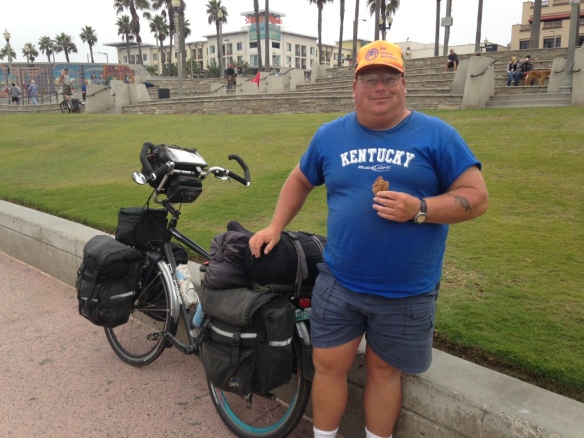 My arrival in San Francisco will most likely be next Thursday, November 7th and the days until then will be tough but I’m really excited for the last part of this incredible adventure. I will probably update the blog again after I get to SF which means next weekend.

One more note: I have reached my initial goal of 2000€ for Make a Wish Germany thanks to your donations, but you can still donate! I raised the goal to 2500€ because some people thought they couldn’t donate anymore, but it is still possible even beyond the goal :). So just go on my donare-page and if you need English instructions, you’ll find them there.

Take care and thanks for reading!