It has only been a couple of days since my last entry, but I have had some of my favorite cycling-days of the whole trip and also want to take the opportunity to update my blog, since I don’t have internet most of the time.

After my 2 days in Monticello, I just had a short 35km-ride to the town of Blanding. I stopped there because it was the last town for 200km. I stocked up on food and water and left the next morning to hit the desert. It was an amazing ride! The street was in good condition, there was almost no traffic, the weather was great and the scenery breathtaking. I just really like the red of the sand in this area and there were some really cool rock-formations all around me. It reminded me of the pictures of Monument Valley, but the big difference was that I was able to enjoy all the views completeley alone. No other tourists and whenever I stopped to take pictures or just enjoy the view, the quiet and calmness was relaxing. I looked around and there was not a sign of anything human – except for the street I was riding on obviously. 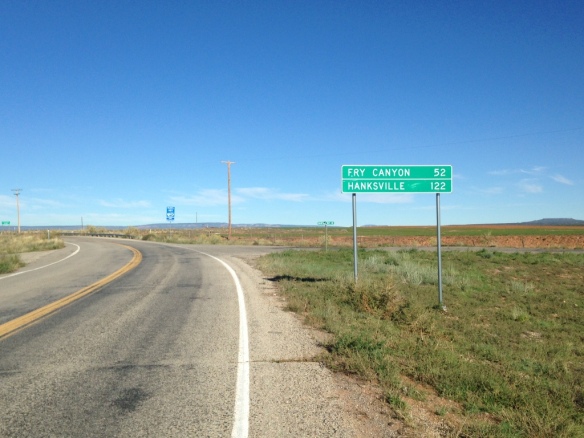 Fry Canyon doesn’t exist anymore, so 120 miles to the next town 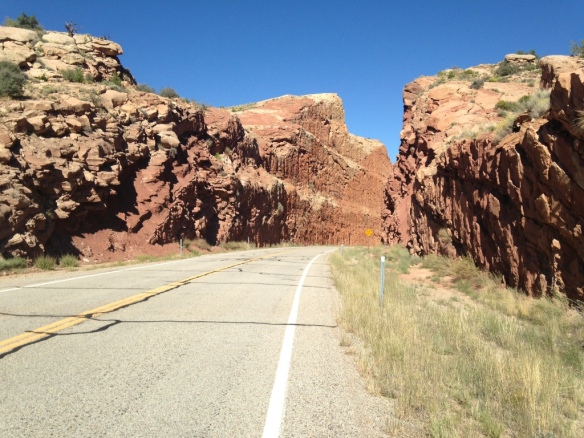 The way to Natural Bridges

I made it to the Natural Bridges National Monument and set up my tent at the campground. A German couple from Heidelberg that arrived in a RV invited me not only to stay at their site so I didn’t have to pay, but also for dinner and breakfast the next morning – what a treat! 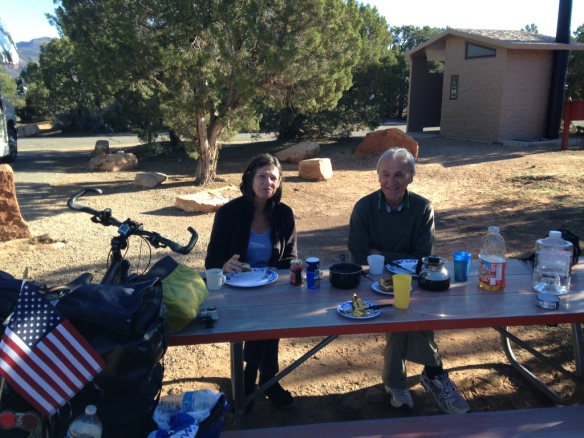 Thanks for food and company!

This area of Utah is known as the one with the least amount of light-pollution in the US. When I first heard about that, I didn’t really know what to think about it but I soon found out: I have never seen clearer and more beautiful night-skies in my life. When I got out of my tent at night, it felt like I could reach out for the stars. There were so many of them and the milkyway was running right over my head – one of the most impressive views on this trip and also one I unfortunately cannot share with anyone since the pictures I took turned out to be just black. So you’ll just have to believe my description and go there yourself to be able to enjoy it.

When I was getting ready to leave the next morning, I filled up my water-bottes at the visitor center and talked to the park ranger for a while. I told him my plans for the next weeks and he goes: “you do know that all national parks might close tomorrow at midnight, right!?”. Of course I didn’t know, because I hadn’t had internet for a while and can’t really follow the news on my trip anyways. So I thought some of the parks might close because the season ends October 1st. But then he used the words that I had never heard before and should be hearing and reading a lot in the future: “federal shutdown”. I still didn’t really know what to think of it and just kept going, because the ranger station in Hite was the only place to get water for the next 150km – so there was no alternative. The ride to Hite was as beautiful as the one the day before and I could say the same things about it, but I won’t. I will try to select the best pictures to give you an idea what it was like. When I got to Hite, the rangers were really friendly and let me pitch my tent wherever I wanted. Besides the ranger-station and a small shop that was closed there was nothing. Hite used to be a marina and a popular spot for tourists with boats that went on Lake Powell. But the lake is not there anymore and therefore the town isn’t either. All that is left is a really cool dry landscape where the lake used to be and the marina facilities – one of them was perfect to take a shower. 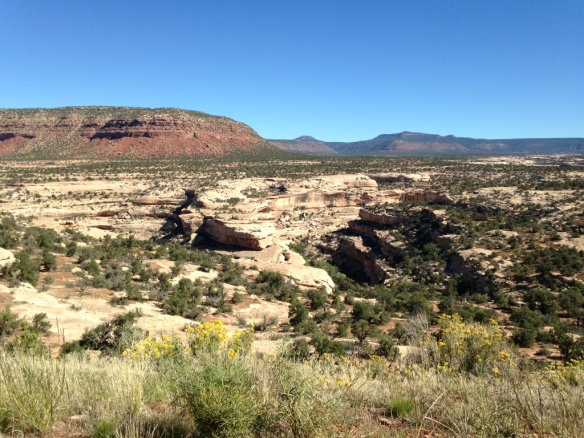 Impressions from the ride to Hite 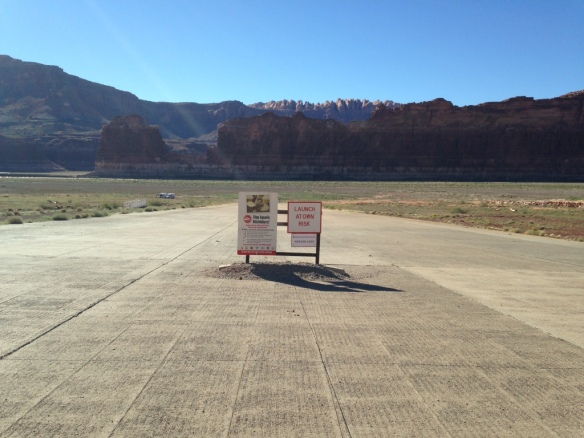 Remnants of better days – one of them was my shower

Cool ground structure where the lake used to be

Later that day, two Canadian couples showed up with their RVs and camped “in” the old lake. I talked to them for a while and they invited me for dinner – it was an amazing meal and good company! I ended up having some of the best meals in the desert. The night was a really quiet one again and the next morning as I was leaving the ranger station, the rangers were barricading the entrance – the shutdown was actually happening. I talked to them for a while and they didn’t know what was going on, if you could still take the highways through the parks or for how long this might last. I was really worried for a moment, because my next days and weeks consist of several national parks and I was afraid that they wouldn’t let me go through them. I didn’t really see any alternative. Luckily it turned out that the state highways crossing the parks would remain open. Only the scenic loops, restrooms, visitor centers etc would be closed. For me, that worked out perfectly, because I was still able to camp at those spots for 2 nights and fill up my water. If I would have been there 2 days later, I would have had no water for 200km. That shows that it’s not only a stupid political game, but also very dangerous!

Another big thank you! 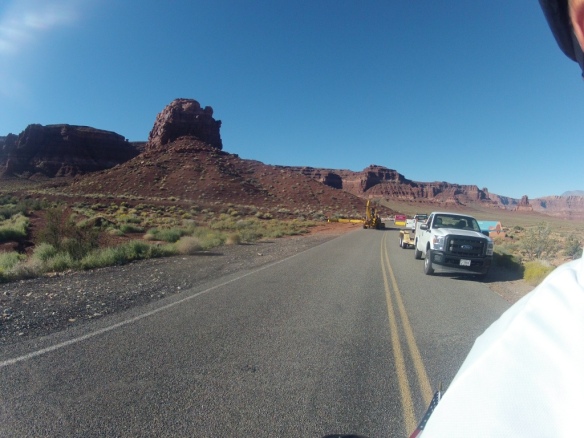 They are putting up the roadblock behind me

The night after the ghosttown Hite, I stayed at a farm once again – in Caineville. Randy, the farmer and Emily and Jesse, the seasonal workers, let me pitch my tent on the property and I even got to pick some fresh apples to take with me. That’s one thing I really miss: a big supermarket with a good selection of fresh fruit. I haven’t passed one of those since Pueblo, which has almost been 3 weeks now. And probably won’t see one of them for another 2 weeks or so. All they have in the little towns are general stores with no selection, no fruit and high prices. But I’ll get over it.

From Caineville, I made my way to Torrey and had to go through Capitol Reef National Park. The scenery was really cool with again red rocks, cliffs and canyons. As expected, everything but the highway was closed – I even got kicked out by a ranger for sitting on the wall of the visitor center to get off the road and take a break. After a heated argument, she let me finish my drink. That was one of the only bad experienes on this trip so far. It’s one thing to lock up restrooms and not let cyclists fill up their waterbottles on their way through, but to tell them they can’t sit on a wall is just ridiculous. I talked to the Sheriff a little bit later and he told me: “Well, the good news is: once you get out of the park, everything is open!”. I guess that’s a good way to look at it. I’m actually not too worried about the national parks being closed. I find that they are not really fun with a bike anyways. I see so much stuff on the way, canyons, mountains, rivers, forests, etc. It is pretty much the same just with less tourists and I can always go back to the parks with a car. 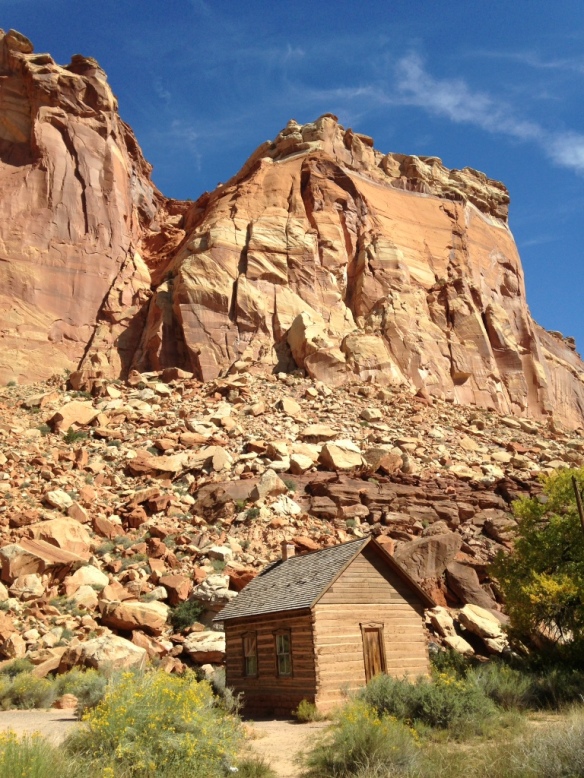 The night I stayed at Lyman’s place in Torrey. It’s another amazing warmshowers-host and when I got there, Tim, the 63 year old guy from Seattle was actually there aswell. He is taking a couple of days off to rest his knee. We cooked dinner and planned the rest of our routes. I considered staying another night aswell since some strong winds were coming up, but a day later, there was a chance of snow so I left the next morning. I had to cross another high pass (9600 ft – 2962m) and it was the toughest one of my cycling history. It was 40km long and had long steep stretches with up to 13% – again, these numbers are hard to understand if you are not a cyclist, but it’s tough. When I was about 5km from the summit, it started to snow and hail and my hands were freezing. The wind was really strong and I was just really happy when I got to my destination in Boulder. And although the climb was tough, I did have some really great views. Especially the colors of the trees were impressive and the yellow, orange and red leaves are – besides the dropping temperatures – another sign for the upcoming fall. 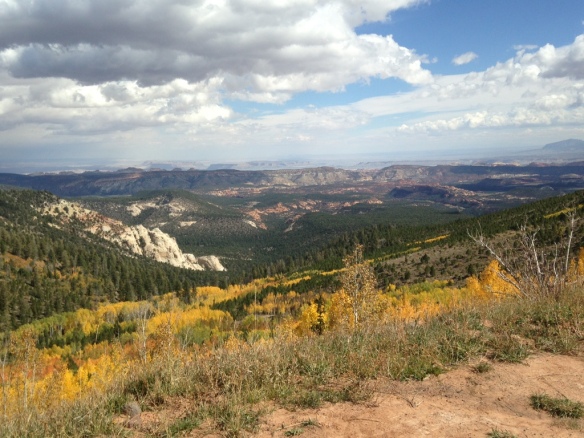 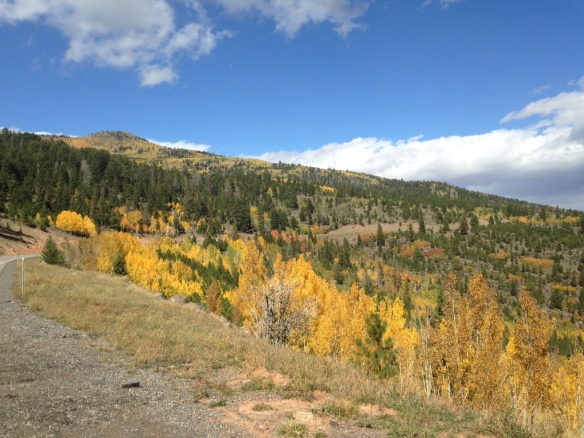 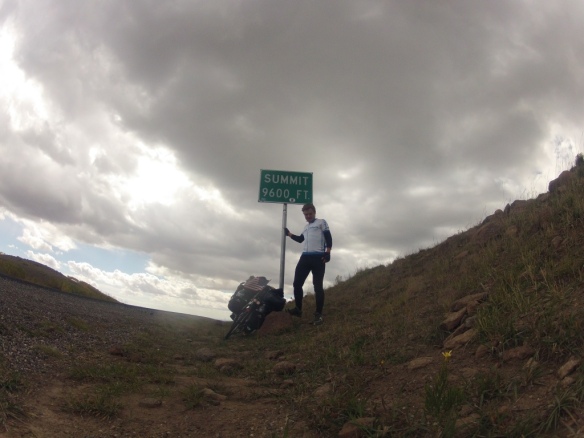 In Boulder, I’m staying with Pete and his wife Tina. I had contacted their daughter Hannah via couchsurfing and while she is travelling herself, she helped me out and gave me the contact information of her parents. It’s really nice to have a place to stay inside when it’s cold and windy outside! They took me to a poetry reading at night and even let me stay another night to wait for the weather to get warmer and to write my blog. Today, I got to take their car to a nearby canyon and just got back from a hike up the mountain with Pete and their dog Pi. So even on my restday I wasn’t lazy ;). 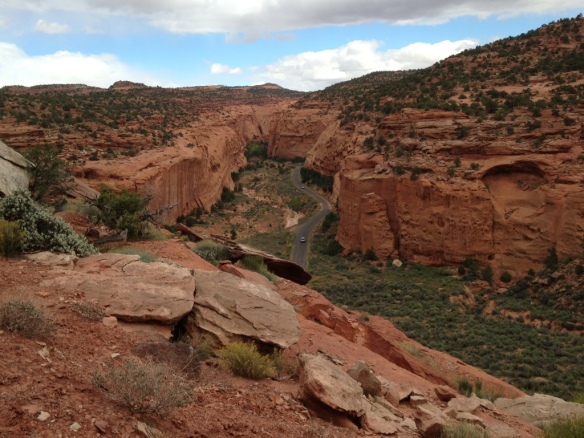 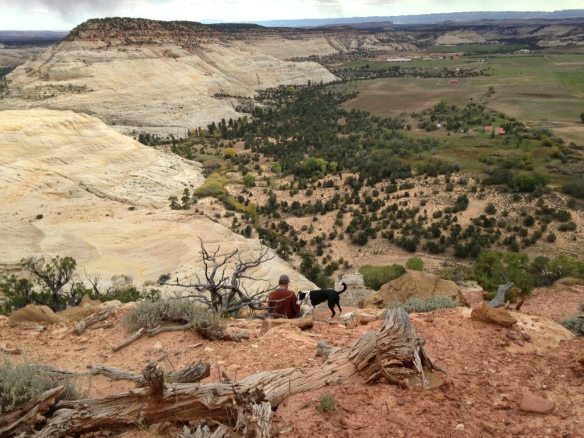 Pete and Pi taking a break on our hike

Ok, that’s the main things I wanted to mention. At first I thought, I would only upload a lot of pictures, but it ended up being a long text aswell. As you can see, there is always something going on. I have actually been struggling to select pictures. I took about 300 in the last couple of days and would love to upload all of them, but I tried to find a good mix for you.

So, the agenda for the next week:
In about 9-10 days I will be at the Grand Canyon. I will stay a couple of nights there and then make my way through Arizona to California. I only have 18 days of biking left until the Pacific Ocean in San Diego. But I might take a restday here and there, because otherwise I would get to San Francisco to early considering my flight back is on November 14th.

Hope you enjoyed the blog and the pictures and don’t forget the donations on my donation page for Make-a-Wish Germany!