I have finally made it to another state and crossed the border to Kentucky a couple of days ago. It was a great feeling, because I had been riding in the mountains of Virginia for a long time and crossing a state-border always makes you feel like you are getting somewhere.

The past couple of days have been tough because of the mountains and steep hills. Also, I really needed a restday after 11 days of riding. This made me realize that I need to plan ahead, but also need to set myself smaller goals for every couple of days. I had the goal of reaching Berea this friday for over 7 days and because of that I couldn’t really enjoy every single day of arriving at the destination, because I always just thought: “x more days until Berea”. From now on, I will still plan ahead, but definitely relax more and try not to think about the next days as much. And it will be easier from now on, because the terrain is supposed to be less hilly and I will actually cross the border to Illinois and Missouri within the next 10 days probably.

So about the last couple of days: I actually started riding with Peter who I ran into somewhere in Virigina and who is on his way to Seattle. It was a nice change to not ride alone and have some company along the way. For me, it was also great to have another person with me to fight the dogs of Kentucky. The last days in Viriginia had again beautiful mountains with tough climbs. I always try to capture the steepness of the climbs with my camera, but it’s just not possible – I will not stop though!

I don’t remember if I have written this on here before, but climbing is mostly a mental challenge. The days with long climbs that you can see on the elevation-profile and that scare me the night before when looking at my map mostly turn out fine – you KNOW and prepare yourself for a tough day and set yourself goals. The days that ‘kill’ me are the ones that seem to be easy. No major hills can be seen on the map, but they are there. Some of them with 14% climbs and you just get frustrated because you don’t know how many more are to come.

Anyways, we finally crossed the border to Kentucky and had encounters with dogs on the first couple of miles. It’s weird that it actually happened right after the state-line. You would imagine that a state would put up laws or fines for dogowners since cyclists are a form of tourism and the region that I have been going through seems like it could use money from this sector. Nevertheless, the dogs have not been as bad as I had imagined them and a lot of people had told us (knocking on wood). We had maybe 10 minor chases and most of them stopped after we shouted at them and just started riding very slowly. I do have my pepperspray and airhorn ready though – just in case.

Since I’m talking about dogs again, I also want to give a short weather-update. It’s been great so far. The tough days in the mountains were nice with occasional showers. The last couple of days have been hot and humid again. I was concerned because the weather-forecast always predicted scattered thunderstorms pretty much every day, but I learned to live with the fact that they don’t actually happen most of the time. It’s still scary when they do occur and you don’t have anything around. But that has only happened twice. One of those times, Peter had a flat in his reartire, but luckily there was a pharmacy where we could wait for the storm to pass. 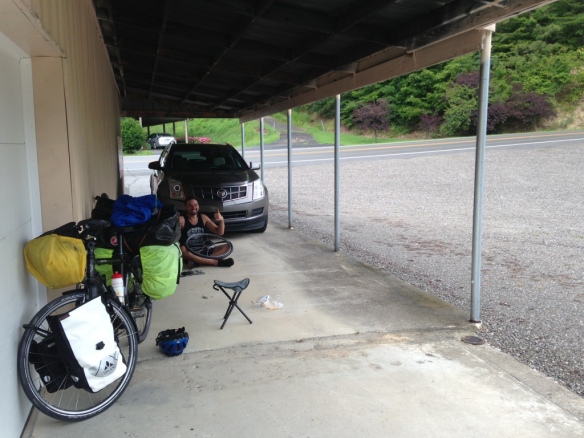 I have met some very interesting people going the opposite direction. By now it has probably been 15-20 cyclists. I was most impressed by this couple, both 73 years old, biking all the way from Oregon to Virginia. I was exhausted after this tough climb and when I took the last turn, I see those two on their tandem. Almost 50 years older than I am and pretty much doing the same thing – really impressive! Those encounters are a nice change and always a welcomed break. Especially comforting was the question of one guy asking: “how are the dogs up there?” – up until this point that had been my first question to every cyclist I met. And now someone was asking me – meaning I might have passed the worst part of it – we will see.

But it’s not only the cyclists you meet – wherever I go, everyone is looking, waving and asking questions. I have to say that the people in Kentucky have been really friendly so far. Almost everybody waves or says something encouraging. The funniest conversations are with the ‘rednecks’ or let’s call them ‘country-people’. We were sitting at a small diner when one huge guy got out of his even bigger pickup-truck and approached us. After the usual questions of where we were going and coming from, he just asked: “Why the hell would you do that?”. When I told him that I wanted to experience freedom one last time before heading to work ( I just said that because I thought he would love the word freedom), he just said: “Shit…freedom…you’re gonna get your ass killed on them damn roads around here. I’d definitely carry a gun with me to protect myself from them dopes and hillbillies.” He actually said all of this with a smile (and a really funny southern accent) and was after all impressed of what we were doing. And after several days on the road I can say that he was exaggerating and the drivers as well as the people I meet are not a threat to my life. But during that conversation more and more people came to join and all wanted to add something. After a while we were talking to a couple of them and it was just funny, because I had the feeling I was talking to the kind of people they were referring to. They offered to throw our bikes in the back of their trucks and take us up the next hills but we told them we had to do it ourselves.

One time, I walked out of a gas station after I had filled up my waterbottles and when I got back, someone had put an American flag on my bike. So I have been carrying that with me and ever since I have the feeling even more people wave at me.

Because a lot of people ask me where I stay every night, I want to answer that question on here aswell. On the cycling-maps I have, there are a lot of places where cyclists can stay for free. It’s city parks, churches or fire departments most of the time. It’s nice because a lot of those places have showers aswell and sometimes you have a place to sleep inside. One night, Peter and I got to stay in a gym of a church and another night, we stayed at a city park where we met Julia and Dan, a couple from NYC. They are also cycling to SF and that night we all set up our camps in this park and relaxed with a cup of tea and talked about our experiences so far.

Now my restday in Berea is almost over. Berea is a little collegetown in Kentucky and I get to stay with Robert and Elizabeth and am really thankful for a comfortable bed and food. I also met George, who is a local bicycle enthusiast and took a look at my bike to get some basic parts checked. I’m still really impressed by the hospitality of all the people here. Wherever I am, I have the feeling that I will find a place to sleep and get something to eat – I hope I’ll still have that feeling out west. 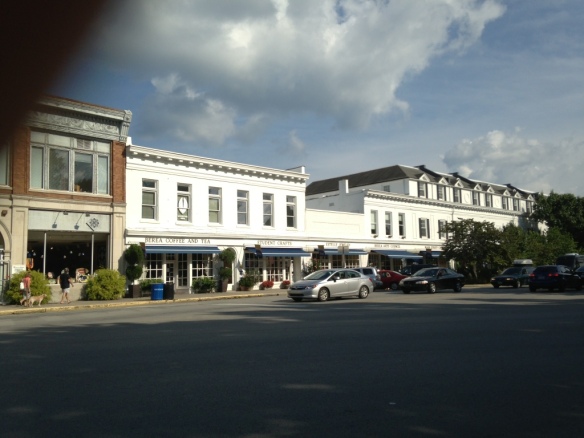 We are actually about to go to a friend’s house for the evening and I might have a beer. Speaking of beer: there are still ‘dry counties’ in Kentucky which means that you cannot buy alcohol. They still have those laws from back in the prohibition era and it’s different from county to county. One time, I was climbing a hill and at the top of it, there was the county line and just one store in the middle of nowhere. The sign said “Last chance beer and liquor” – I was entering a dry county. It’s just a funny sidenote from a German perspective since I couldn’t imagine a city or area not selling alcohol back there. 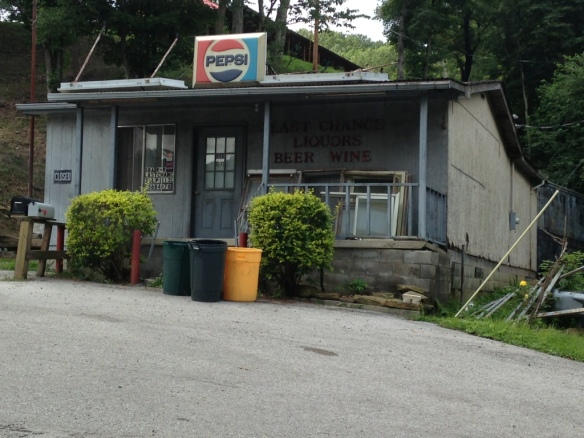 So, this was the wrap-up of the last couple of days. Peter is actually taking a longer break here, because he has family and friends in Kentucky so from tomorrow on, I will be by myself again. Looking forward to heading west though and am really motivated. Just planned the next couple of weeks and it seems realistic that I will reach Pueblo, Colorado by September 15th-20th, which was my goal. But until then I will have 22 more days of cycling.

Anyways, I will post a new entry before that. Probably next week from Illinois.

The descent from Big Hill to Berea

No, I haven’t been to KFC yet…

Planning and sharing experiences with Tom and Michael from Scotland and England who are doing the Transamerica-Trail the other direction – http://www.transamcyclists.blogspot.co.uk